Pun intended! (With a special shout-out to “Girl on the Contrary“!) 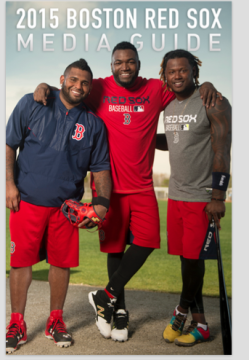 I’m expecting big things for my Red Sox this year – and MAN, look at how lean David Ortiz is!

A while ago, I mentioned needing to figure out how to follow my Boston Red Sox once I go mobile. My initial thought was to simply subscribe to mlb.tv, so I could watch games online. After reading a bit more about some of the campsite policies to which I’ll be subjected though, I realized the vast majority of them were going to throttle bandwidth to the point that the online approach to getting my Red Sox “fix” just wasn’t going to work (gee, and I had just put a USB-compatible intravenous syringe on my Amazon wish list)!

Someone … probably Larry, seeing as he is my most reliable source for good ideas … suggested that I look into satellite radio.  So I did.  Not only would I be able to listen to the Red Sox, I’d be able to catch virtually every MLB game, “live”.  Which means I’ll also be able to follow the San Francisco Giants as well. (I’ve been rooting for the Giants longer than I have the Sox, although not as ardently – that comes by way of Grandpa Tice, who was as big a New York / San Francisco Giants fan as they come and who I mentioned in a previous post as being the one who is most responsible for me becoming a baseball fanatic!)

Anyhow, I initially looked into it a little over a month ago and set it aside to concentrate on other things.  Larry called me the other day and said he found a unit that was selling on eBay and wanted to get it for my birthday … but then we started talking about options, so I told him to hold off and that I’d do some exploring.

That was when the pain began.

I reviewed information over at the SiriusXM site again and realized why I had set it aside – there are so many options that my eyes were crossing.  And they sure don’t make it easy for you … I think they hire pricing managers out of the cell phone and cable TV industries to put their packages together. And I think it’s all done so that you simply throw up your hands, buy the most expensive package they have and say, “I give up. Here, just take my money!”  That goes against my nature, though.

So I got on a chat with one of their representatives.  Explained what I wanted – MLB, NBA, NHL were the primary “wants”.  NFL was secondary … and I was sure that whatever music was available on their packages would be fine.  What transpired was what could only be described as a circle-jerk.  He kept recommending the most expensive “All Access” package, I kept asking if there were other, less expensive packages that would meet my need, after which he’d write, “well, you can check out the packages for yourself.”  Of course, they don’t offer a side-by-side comparison that shows you what channels are available in each bundle … and I said that, that it’s not easy to find what I’m looking for, which was why I was on this chat. And couldn’t you recommend a package that would meet my need?  And the answer would be, “Well, I recommend the top of the line package because you’re sure to get everything that you want.”  And there were three go-arounds of this insanity.

“And that’s when I killed him, Your Honor!”

I thanked him for being absolutely no help whatsoever and closed out the chat.  As an aside, I miss old-style phones.  The ones you could slam down when someone on the other end pissed you off.  There’s just zero satisfaction in angrily clicking on a mouse button!

After that, I took about an hour and did my own comparison, and found that the next lower tier – their “Select” package – had what I was looking for, for about $5 / month less. It doesn’t include NFL games, but that’s okay … I can’t see myself listening to football games on Sunday afternoon, especially since: A) I don’t really have a team that I follow; and B) any football “fix” I might need can be found via the college games that are broadcast on some of the other channels in the “Select” package. (Plus, I can always find a “Frank-friendly” bar come Super Bowl time where he and I can take in the game.)

About the time I was finishing that up, Larry emailed a link to a site with coupon codes for SiriusXM subscriptions.  But I decided to figure out my equipment needs first. The radios are all designed to play either via your car speakers, a home stereo system or a portable “boom box” that are designed specifically to interface with the different radios.  But here’s the kick – some are designed to receive “XM” channels, some are “Sirius” and still more can receive both (the result of the SiriusXM merger a while back).  I could see that more eye-crossing was in store. 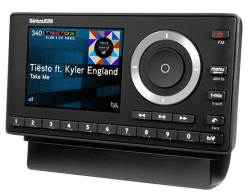 The XM Onyx Plus is how I’ll be getting my Red Sox fix this summer!

I had more or less decided on the XM Onyx radio … I’d be able to get all the channels I was looking for and it wasn’t the most expensive one out there.  I called Larry to tell him what I had decided and he suggested I should go to the XM Onyx Plus because there were a couple of nice features that he thought would be worth the extra $30 – things like a “pause” capability and one-touch channel changes. That’s the one he has.  We think enough alike that I’m taking his advice.

With that decided,  I went back to the eBay item, but when I hunted around a bit more, I found another couple of deals, one of which I was able to successfully bid on (you gotta know how to do bid to win at eBay, right?) Just before starting this post, I bought a new, in-the-box Portable Docking Station (model SD2) for only $58, including shipping … one that retails for $120!  I’ve also found a couple of XM Onyx Plus units for sale over there as well. One new and one used.  The bids close on Saturday, and I’m going to see if I can do a better deal via eBay rather than getting one directly from SiriusXM.  That way, I won’t have to sign up for a long term subscription in order to get their special hardware pricing … I’ll be able to take advantage of one of those coupon codes instead.

But as I said in the beginning, the whole process has left me “Sirius(XM)ly” ticked off.  It just shouldn’t be that difficult.  And I’m not even out of the woods yet – I still have to deal with them when I negotiate the subscription price. Further, I’m going to have to go through a similar process again when I redo my phone plan before heading out in June.  At least I won’t have to worry about looking through all those cable TV packages anymore, right?

More posts to follow once I get everything ordered, delivered and go through the car installation process (which should be a hoot, because I’ve never been much of an electronics geek, let alone someone who’s installed peripheral equipment in his car before).

Do any of you readers have your own SiriusXM nightmare stories you want to share? Or do you have any advice on talking to them about their plans? I’m all ears!